Mages don’t directly use their weapons to attack enemies, as they’re not dependant on them for dealing damage. These weapons just act as a stat stick for them, so that they can alter the high amount of natural energy in them to cast spells. Their spells can vary depending on their offensive or defensive combat class.

It is recommended that a player with mage class should stick with whatever weapon grants him the greatest number of stats.

A mage class can equip Staves, One-handed swords, Daggers, and Wands. While staves and wand skills are already learned as a beginner, you’ll have to learn how to equip Daggers and One-handed sword as you make progress in-game.

Every mage class starts off with one weapon skill learned by default.

At level 10, Classic Mages unlock the access to learn additional weapon skills from weapon trainers in capital cities, with a cost of 10 silver pieces. Not all cities have trainers for all weapon skills.

These are the locations of Weapon Masters in capital cities.

While levelling up as a mage, you will want to look for weapons that give you the most stats. Yes, staves are generally more recommended while levelling, as you won’t be needing an off-hand weapon to fully benefit or support your weapon slots. On the other hand, Wands are extremely important for a levelling mage, because they are a source to deal constant damage without the use of any mana. Also, it is definitely a slot one should want to keep updated as much as you can.

There are quite a few notable wands you can find from vendors, outdoor quests, dungeon quests, and are listed as follows –

· Level 51:  Rod of Corrosion from Shade of Eranikus in The Temple of Atal'Hakkar

We do know that weapons are not as important for Classic Mages during levelling, but there are still weapons that can help you in your journey. The rewards that I’ve listed below have one common link between them and that is ‘Spell Power’ – which is by far the best stat for levelling mages.

· Level 48:  Spire of Hakkar, Staff from Shade of Hakkar in The Temple of Atal'Hakkar

· Level 49:  Drakestone, Off-Hand from Several Bosses in The Temple of Atal'Hakkar

At level 60, you can purchase several powerful upgrades for your weapon.

After the release of a level 60 horde raid called ‘Ahn'Qiraj’. It is recommended that you switch to One-hand and Off-hand weapons, rather than staves. Now, before you ask why? The reason is because this zone depends heavily on what you have, so it’s better to use whatever give you more stats. 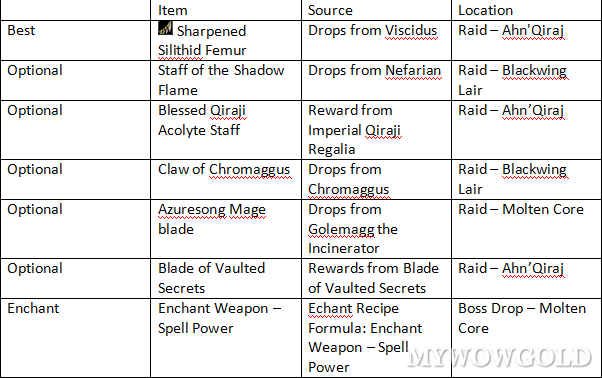 It’s time that we switch to fire, so we have to say adios to Cold Snap and Wand of Biting Cold.

Talking about weapons, mages can equip one legendary weapon in Wow Classic; Atiesh, Greatstaff of the Guardian, which is only available in Phase 6. This staff contains heavy amount of spell power and a special effect that increases the Spell Critical Strike Chance for members of your party.

There are thousands of weapons that can be equipped by a mage class in WoW Classic, and is browsable in Wowhead’s Classic Item Database. You can narrow down your search results thanks to the filters, this can help you find specific weapons that you’re after.

· Type and Level: Search for a certain type of item, like all Cloth Helms + Gloves or all rare staves. You can further narrow things by their required level if you're interested in twinking or levelling upgrades.

· Phase Availability: There are six content phases in Classic WoW(here wow classic gold so cheap & fast), with many pieces of gear coming from PvP, dungeons, or raids in later phases, so we've organized all items by their phases.

· Stats: You can filter gear by every statistic in Classic WoW, ranging from Primary stats like Intellect to defensive ones like Fire Resistance.

· Source: There are filters for all types of sources, including drops, crafted items, and quests.

We hope that helped you pick the best Mage weapons for WoW Classic, good luck!