Doing the Zul’Gurub raids in World of Warcraft Classic? Perfect, you’ve reached the right spot to receive the correct, compact, concise information needed to defeat the raid’s bosses! It’s one of the end-game raids, requiring you to be level 60, so being well-prepared is a necessity to be effective with your (up-to) 20-man raiding party here.

The Zul’Gurub raids have some optional bosses, as you’ll be familiar with raiding by now, not every boss has to be defeated or even encountered. In this particular raid, however, every boss with a prefix of High Priest or High Priestess is absolutely required to progress the raid. As such, you have no option but to defeat this boss, which is usually the third encounter.

Until you defeat Mar’li, you will also give the buff of Aspect of Mar’li to Hakkar. Without further ado, let’s get into the strategy and mechanics Mar’li. 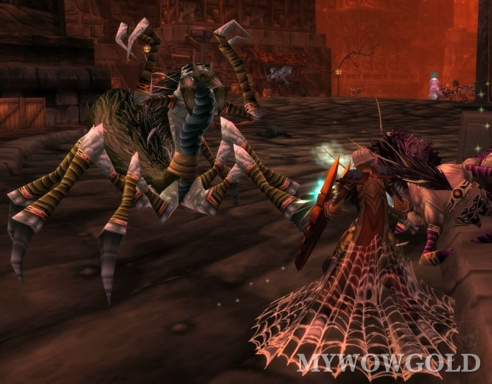 Without a minimum of two tanks, you’re going to struggle to defeat Mar’li.  The boss has two phases/forms. Many bosses in World of Warcraft Classic have forms that alternate at different %, usually, once they’re at lower health, they transition into a significantly stronger form with better abilities and inflict more damage. This isn’t the case here, the transitions are done roughly every minute (on a timer), between a priest and shadra (spider) form.

If your role is that of the ranged DPS and healers, you must stay, at minimum, 30 yards from Mar’li. This is due to the Poison Bolt Volley ability that, as aforementioned, acts within 30 yards, and deals from 375 to 625 nature damage. It also does additional damage of 289-411 damage every two seconds for 10 seconds (so 5 bursts of additional damage done against you). Any healer or ranged DPS will die straight away if they do not anticipate this. Melee DPS can use some nature resistance, but of course, this negates your damage so isn’t worth it.

The above information applies equally to both forms. This is because the Poison Bolt Volley is accompanied by an ability called Enveloping Webs. Whilst the enveloping webs ability applies only within 20 yards, it completely silences them and reduces your attack speed by 100% - negating any damage you can do. You’re rendered effectively useless, and the boss is further programmed to complement this ability with the charge ability, wherever and whenever it is possible. As such, following the correct distancing advice is of paramount importance and cannot be ignored under any circumstance.

If you’re inflicted with poison, certain abilities can help. Such as the Poison Cleansing Totem that is accessible for the Shamans class.

The High Priest will also spawn spiders, as what is known commonly as ‘adds’.  These must be dealt with by the DPS immediately, and not left to stack against your party.  These adds are only available to Mar’li in the Priest phase. The problem with these spiders is that the longer you take to deal with them, the more trouble you’ll find yourself in. With the growth ability, the damage + size of the spawn will grow by a quarter every four seconds. It can also be accompanied with the enlarge ability. So, you need to deal with these spiders before they are grown and out of control and outnumber you. It’s best for ranged DPS to deal with these spiders.

The boss will also, after casting Enveloping Webs against melee DPS, will then charge against your ranged DPS. The off-tank must be awaiting this event and return the boss to the melee DPS. Your off-tank is to focus on the first add (that spawns alongside the boss) and then sit with the ranged DPS and healers at a distance of 30 yards.

The third important ability is drain ability. Your melee DPS will need some form of interrupt ability to combat this. Otherwise, you can have Mar’li healed for 12,500 - per second. Not only that, but it will also deal damage of 3500, or drain the health from one of your party members. If you do not interrupt this ability, then Mar’li will have effectively infinite health - she will constantly regenerate and reverse your damage. Interrupt abilities, if you need a reminder, include abilities such as Kick and Shield Bash, but there are many ways of achieving an interrupt. Another such ability would be Pummel.

To pull the boss away from the spiders at the start, if you’re a Priest with the Mind Control ability, you can help the tank. You can cast Mind Control on the speaker next to Mar’li, and she will be aggressive towards the speaker, giving the tank some precious additional time whilst the boss cannot do much.

Overall, the most important thing to do is to be aware of the main abilities. The abilities listed in this guide are actually only the important ones. The other ones are nothing if you do not understand the crucial ones. For example, if you do not control drain, your party will never be able to defeat a boss that constantly regains health and reduces yours. If your party’s ranged DPS and healers are within the boss at any point during the fight, they’re in for a rude awakening with Enveloping Webs and Poison Bolt Volley. If you do not have an off-tank with your ranged DPS/healers, after Enveloping Webs is cast, you’ve wiped out all of the aforementioned.

If you understand these 3 main abilities, you should do perfectly fine against this boss. The phases aren’t too difficult to understand compared to some of the other bosses.

Another exclusive drop you can look forward to is the Flowing Ritual Robes. It’s a level 65 item that provides 100 armour, +15 Stamina, +23 Intellect, and +24 Spirit. All healing and damage by any type of magical spell receive a varying increased modifier of up to +22. This item also drops at a rate of roughly 10%.

By the way, get the cheapest wow classic gold from us, its so fast and easy, good luck!