WoW Classic features a vast amount of professions for you to choose from. However, with all the professions, comes along a whole lot of confusion and unfamiliarity. So, in this guide, we’ll be taking you deep into professions in WoW Classic.

To level your profession, you simply craft or collect items before the game decides that it is too simple for you, and you are directed to build more complicated recipes and collect items for professions in more dangerous areas. Orange: 100% chance to get a skill up. Yellow: Often. Green: Infrequently. Grey: Never. There are special exceptions for a few professions, however.

You need to go back to a professional trainer and learn the next rank and keep getting skills: Apprentice – up to 75. Journeyman - up to 150. Expert - up to 225. Artisan - up to 300. If you change a profession, all ranks are lost, and you have to start skill level 1 again. You must achieve a certain level to train the next rank.

Apprentice - Level 5 for Production / Fishing and no requirement for Gathering.

Journeyman - Level 10 for Production / Fishing and no requirement for Gathering.

Expert - Level 20 for Production, Level 10 for Gathering and Fishing.

Artisan - Level 35 for Production, Level 25 for Gathering, Level 10 for Fishing.

Alchemy is common among the players who need to raid, as many important consumables can be made. For a steady supply of the herbs needed for flasks, elixirs and potions, it is commonly paired with herbalism. Levelling up Fishing will also help give the fish that Alchemy Oil’s needs.

Blacksmithing is most commonly used by plate-wearers, and is usually combined with Mining for Ore. It provides the Warriors and Paladins with valuable weapons and armour. Blacksmiths must use a Blacksmith Hammer to make their wares, and at an Anvil all items must be made. Many special Dark Iron items allow players to be in Blackrock Depths near the Black Anvil. Like Arcanite Reaper, Invulnerable Mail, and Sulfuron Hammer, are some notable weapons and armour Blacksmiths can make. Blacksmiths can choose to specialise as an Armorsmith or Weaponsmith at level 40 and level 200. You have access to a range of new recipes with a specialisation, but you can't use recipes that are unique to other specialisations.

Enchanting allows players to permanently improve multiple gear slots (weapons, boots, bracers, chest, cloak, gloves, shield) as well as disenchanting gear into dust for Enchants to use. Most usually this profession is combined with Tailoring and taken by casters. You'll need to rods, like the Runed Arcanite Rod to get enchanted gear. For Enchants requiring a higher skill, higher quality rods are required.

Engineering is the most exciting profession, with a range of gadgets and gizmos offering exclusive use. Engineering is a strong profession for DPS classes, particularly Hunters, and PvP's go-to profession, with a special value for low level PvP. Players can use explosives such as Arcane Bomb, which drains mana and silences, and Hi-Explosive Bomb, which deals with AOE Fire damage, to get extra DPS and utility benefits.

Herbalism is common among all players interested in gold making, as the herbs are required by Alchemy to create raid consumables such as flasks. Typically, these two professions are paired together. You can get the elusive Black Lotus at 300 skill level, if you can find it. This rare herb is used for summoning bosses in Zul'Gurub in all Classic flasks and in Gurubashi Mojo Madness. Herbalists can also harvest Bloodvine through the use of the Blood Scythe, which is useful for crafted Resistance Equipment.

Leatherworking is used for the crafted gear by the Leather and Mail users. For the leather and scales required for the gear it is commonly paired with Skinning. Leatherworking gear can be used in PvE situations at max level, and many recipes offer stats of resistance. Some notable Leatherworking armour sets include Primal Batskin, Green Dragon Mail, Black Dragon Mail, Blood Tiger Harness, Stormshroud Armour, and Devilsaur Armour, among various specialisations. Leatherworkers can also specialise in one of three types of armour at level 40 and 225 skills: Leatherworkers can also make armour kits, which usually provide a defensive value for helm, legs, chest or feet, such as the Core Armor Kit.

Mining goes well with Engineering and Blacksmithing, as these two profesions need the ore to craft useful items. You must have a Mining Pick to have a node to Mine. The Miner must smelt it at an anvil, in addition to mining raw ore, turning the ore into bars that can be used for crafted recipes.

Skinning is well suited to Leatherworkers, supplying leather, herbs and scales for crafted equipment for players. You must have a Skinning Knife to skin a mob. While you can level up to 300 Skinning, you can increase your skill the limit by equipping special items such as Finkle's Skinner. 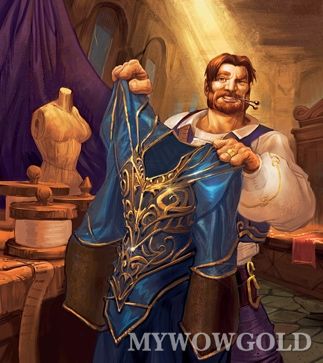 Castors often choose tailoring, coupled with Enchanting, to dust unneeded crafted gear. Cloth looted from mobs around the world can be turned into cloth bolts, and then with this skill, Cloth Armor. Cloth armour and cloaks are mainly made by tailors. These items give resistance at the maximum level, or are part of a set with a strong proc. Everyone requires more bag space, so Tailors craft a variety of bags including the ubiquitous Runecloth Bag but also specialty bags such as Big Bag of Enchantment for Enchanters, Cenarius Satchel for Herbalists, and Core Felcloth Bags for Warlocks.

Cooking gives food players a steady supply that they can eat to restore health and mana. Cooking is also useful to raiders, offering well fed buffs. To Cook you'll need a Cooking Fire.

The biggest benefit of First Aid is allowing anyone to bandage, heal themselves and other players in and out of combat. Warriors and Rogues are most in demand since those classes do not have any healing capabilities. First Aid also has some anti-venom recipes, though the Alchemy recipes are better.

Fishing is a time-consuming profession, but rewarding if you want to cook certain recipes, or need specific ingredients for other professions, such as Alchemy's Oily Blackmouth. Fishing also has a lot of complex mechanics and enjoyable items to try out. For some fishing basics, you’ll need a fishing pole to catch fish. Your chance to catch the fish depends on your Fishing skill. Zones of higher levels will have a higher threshold for skill. Fishing in a specific pool, as opposed to open water, will yield a specific type of catch. Some fish are seasonal while others appear only at night or during the day.

And that wraps up our professions guide for WoW Classic. Are you confused that can’t have enough wow classic gold in game? Don't waste time blindly finding the products instead of buying them. Mywowgold is one of the high-rated trading stores in the gaming market. See what works for you!