The PVP system in the world of warcraft classic allows a player to gain and climb up in ranks, which also unlocks various titles and gears depending on the rank. These ranks are calculated based on the contribution made weekly in the PVP system. This ranking system became live on November 14th, 2019 and the battlegrounds War song Gulch and Alterac Valley became live on December 10th, 2018. 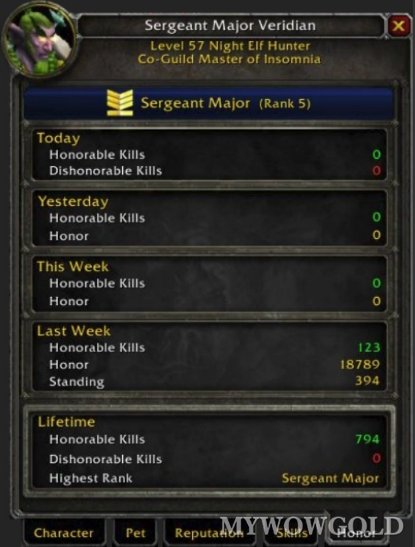 It is a system used to compare the efforts of a player with the efforts of another on the server. Participating in this system will provide you with Honourable kills, also known as HKs. These HKs are normally awarded when a player of a fraction kills a player of the opposite and the requirement is that the player needs to be 11 levels of you so that they’re not displayed as grey for it count as an HK. Example, A player of level 60, any player of level 49 or above will be counted as an HK.

These HKs does not have the same value, and it all depends on the Honour Contribution Points, also known as CPs. A CP can be measured by the experience that a player has in PVP, so killing a player with high amounts of CPs will award you with greater CP upon death, just like a fresh level 60 player who has not made his/her way into PVP yet. Weekly HKs, as well as the previous weeks HKs can be viewed through the Honour tab that is in the respected player's character sheet. A player can also earn these CPs by completing various objectives in the battlegrounds, like capturing of flags in War song Gulch, killing a lieutenant in Alterac Valley or by capturing a base in Arathi Basin. There is a reset weekly and the CPs that is gathered can be used to calculate the players rating. Weekly rating is calculated with the help of an average from the players previous weeks ratings and the current is compared to the other players present on the server.

There are a total of 14 ranks per person, which is awarded to a player in the form of a character title, which also provides benefits These rankings and titles are updated every week, and only during the reset. The system doesn’t work as simple as a levelling system but works on behalf of the efforts that are put into the PVP side. Playing a certain standoff every week will not help the player improve and to do that, the player needs to put more work to get higher standings weekly.

Each rank requires a total of 5,000 points to progress further. So, If the player is a rank 6 knight or stone guard and the progress bar is half full, the points that will be rewarded is up to 22,500 for the week. These rank points can be looked into by accessing the Honour Tab. It is recommended that for a couple of first weeks one should simply grind as much as points they can, as it will help the player climb up the first few ranks and also help to get a better understanding of how the system works. Once you’ve done that, make sure to keep a track on the EST points earned during the grind and it is going to affect the weekly reset on the character, accordingly. After the information gained, the player can start to understand where he stands in the PVP system of the server they belong in and plan a strategy to climb ranks.

Players receive 20% decay based on the points that they’ve gained in the previous week; all of this is done in the starting of a new week. If the week is ended with a total of 10,000 points, then the new week will start with a total of 8,000 points. As these rankings are based on the previous week’s points, the decay will not affect where you stand if you end up revering the lost points.

There are a total of 14 ranks for both fractions and each of them requires a minimum number of points needed to be calculated every week. These are calculated with comparison to the other players on the server and each of these ranks helps to gain rewards from PVP consumables to Epic Mounts that do not require any skill of gear to ride at the highest ranks. These ranks are also applied to the character in the form of a title. 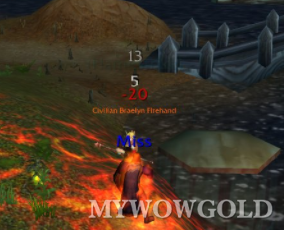 Also known as DK, happens when a player kills a civilian NPC in PVP combat. These civilians are normally low level who are found useful to the opposite fractions and helps to stall a player’s progress when unavailable. They are identified through their ‘Civilian’ tag next to their character name when targeted by the rival faction. These points make you lose ratings immediately and with enough DKs on your head, you may also lose a rank. This is the only thing that can affect a player rating at the immediate spot, instead of waiting for a week to update.

Originally released on June 7th, 2005 with a team size of at least 10 players and the objective here is to capture the flag of the opposite fraction. It is located in the southern part of Ashen vale and traces conflicts between the Silver wing Sentinels who are seeking revenge on the orcs for chopping down their forest during the Third War. There are flags inside the base of both the sides, and the objective is very clear; steal the flag and bring it to the respective base, but at the same time, one must protect their flag as well. A fraction is beheld a winner once it successfully captures three flags.

Originally released on September 13th, 2005 with a team size of at least 15 players and the objective here is to control points. It is located in Arathi Highlands and is based on the conflict of supply forces that took place in central-eastern kingdoms. It is a critical zone and both fractions normally battle against each other for natural resources. The area consists of five bases with flags that are scattered across the battleground: Mines, Lumber Mill, Farm, Stables, Mines, and the teams have to battle each other to take control of each one of these bases. They need to hold the base for a whole minute to start generating resources for the team. The more bases that are captured, the quicker the resources will reach up to 2,000 and help the team win.

Originally released on June 7th, 2005 with a team size of 40 players and this is a player VS player VS environment game. The valley is located at the heart of Alterac Mountains and the battleground is the area where the conflict happens between the Frostwolf Clan and the Storm pike Guard. The valley has many PVE elements, at the same time being a PVP zone. The objective here is to fight and make your way through into the opposite fractions keep to defeat the enemies general. Once the fractions general has been defeated, the team will win.