WoW Classic features many exciting dungeons: The Stockade is certainly one of them. The Stockades is a well-guarded prison inside of the Stormwind, the capital of the Alliance. The majority of the mobs inside The Stockade are members of the Defias Brotherhood. Interestingly, the only mob that drops any sort of Bind on Pickup loot is a rare spawn. Nevertheless, that’s countered by having six quests available from this dungeon. 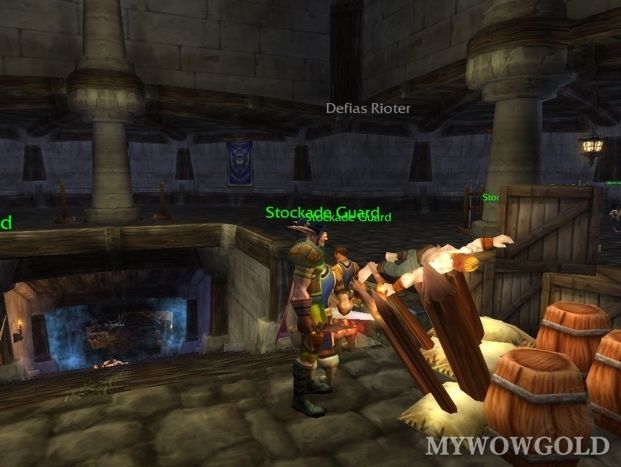 As aforementioned, this dungeon is located within Stormwind: which is the capital city of the Alliance. If you are a Horde player, you will face great adversity in attempting to reach Stormwind, and it is recommended to seek an alternative.

The dungeon can be cleared within an hour and is designed for players who are newer to raiding. The recommended level range is 25-30, you’re aiming to be level 26-27 before entering. If you’re playing a Tank character, consider being level 28+, as you’ll need to be able to absorb the damage for your team. With a full five-party setup, you’re going to want 1 tank, 1 healer, and 3 players focused on dealing damage. You will want one player to also have an ability that will slow down mobs or trap them. This prevents them from attempting to escape once they’re near death.

Note that some of the quests will make you return to the Wetlands from Stormwind. Don’t feel compelled to hand in items all-at-once. It’s better to have a plan of other stuff to do in the Wetlands rather than constantly travelling back-and-forth.

Down the first hallway, you’ll encounter Targorr the Dread. He’s not much to be concerned about, he has two abilities:

You should be able to deal with him quite quickly, as long as you are fully prepared and geared up. Don’t forget to obtain his head after defeating him, it’s needed to complete the quest What Comes Around.

Heading down the stairs, you’ll have to face Kam Deepfury. He’s not much to worry about, being a tank, you want to concentrate the highest damage-per-second against him. The only notable ability is that he has Shield Slam, which can stun you for two seconds. If you had little difficulties in defeating Targorr: Kam will be much-the-same to you.  Loot his head as well, as it’s required for The Fury Runs Deep. If you haven’t started the quest, you won’t be able to loot the head: which is why the quests were previously highlighted.

Proceeding that, you’ll face Hamhock, a two-headed boss. The main thing you want to pay attention to Chain Lightning. It will deal roughly 200 damage to you and jump to your nearby allies at a sequentially reduced damage rate of 70% per jump. It can only affect a maximum of 3 targets. The way to counter this is to simply be careful of your positioning: don’t stand too close to your fellow party members. At the same time, standing completely far apart isn’t feasible as it will draw mobs in from other rooms.

Bazil Thredd is the next boss, someone you want to counter for The Stockade Riots. The main ability you’ll need to be mindful of is the Smoke Bomb, as it will stun your party members for up to 4 seconds. There’s also the Battle Shout, which will increase the melee attack power of his nearby Defias brotherhood members by four for two minutes. The effective way to counter the latter is by dealing with the surrounding mobs as a priority before fighting the boss.

Now, you’re going to play a game of chance. It’s possible you will find a boss named Bruegal Ironknuckle in a room towards your right-hand side. This boss is quite simple to defeat, and if you’ve been able to survive thus far: he will pose no threat to you. However, he’s definitely worth defeating, as he’s the only one that provides gear loot in the dungeon. He can drop Iron Knuckles, Prison Shanks, and Jimmied Handcuffs.

Congratulations if you’ve made it this far - you’re doing great! The final boss is the Dextren Ward. To defeat this boss, you need to ensure you’ve completely cleared out any adjacent rooms. Otherwise, you stand to be quite surprised by the Intimidating Shout: it causes up to 5 (all) of you to flee due to fear. If that occurs, you will then be swarmed by surrounding Defias Brotherhood mobs - if you’re already low-health, this is far from ideal!

This bosses’ lootable head is needed for quest completion of Crime and Punishment.

That concludes the guide. By now, you should be fully prepared to face whatever is headed your way! Whether you have to deal with 5 or 6 bosses, this dungeon can be easily conquered as long as you’re aware of what abilities to watch out for. In addition, don’t forget to loot bosses for their quest items, and hand them in to the quest-giver! The quests can provide you with a great deal of experience and rewards such as classic wow gold and are a great supplement to the dungeon itself.